Telstra is getting serious about using drone technology to boost its arsenal of various access technologies, developing and trialling new drone capabilities that have the potential to assist in disaster management scenarios using the telco’s mobile network.

The technology was on display at Telstra Vantage, where the Telstra Labs team displayed a drone swarm and a mobile ‘cell on wings’ demonstration using 4GX on the Telstra mobile network.

“Especially when you use a swarm of drones to find a lost child, the area covered is instantly so much larger than when you use only one drone,” said Telstra CTO Hakan Eriksson, noting that the potential impact of the technology would increase explosively once the 5G mobile network is deployed.

“[But] this works now, we’ve tested these and it’s operating,” he added. 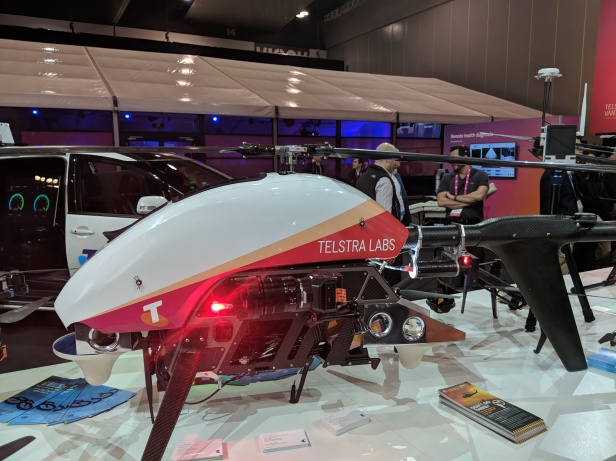 The drone swarm is a set of drones operated by a single pilot flying in formation and using vision capture tech to quickly and efficiently scope an area impacted by fire or flood.

As the technology and regulations mature, allowing for the use of multiple drones per pilot, it will become feasible to routinely deploy drone swarms to simultaneously cover and search a large area.

This, Eriksson said, could save lives in an emergency rescue situation, and time and money in less dramatic situations.

The ‘cell on wings’ is a mobile small cell fixed onto on a drone in order to temporarily boost mobile network coverage in a local area, which is particularly useful in emergency situations.

The Telstra CTO explained that this can be done through a tethered backhaul, by wiring a network cable to the drone from the ground while it is flying, or via a wireless line of site extension, relaying the signal from another tower.