Between July 2017 and July 2018, Telstra customers’ data usage on fixed broadband connections has increased by about 40 per cent, with the telco’s NBN users now numbering some 2 million.

“As more ADSL customers move on to faster speeds on the nbn, we’re seeing a significant data use uplift of nearly 50%,” said Telstra, adding that out of all the states in Australia, NSW led the pack in July 2018 at 71.6 petabytes, downloading and streaming its way to the top of the leaderboard. 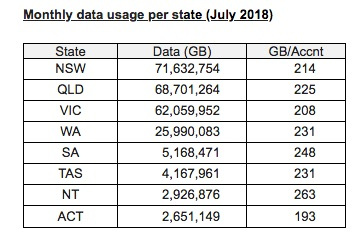 “In fact, NSW households contribute 30% of the total amount of data consumed on Telstra’s fixed network,” said the telco.

“Customers expect their streaming experience to be seamless, and we’ve seen a strong increase in our NBN customer satisfaction measures recently as we continue to focus on this experience,”  she added.

Netflix estimates its streams use up to 3GB per hour for each HD video stream. This, Telstra said, means in July 2018, total data used by Australian households (243.3PB) is the equivalent to watching nearly 81 million hours, 3.38 million days, 112,638 months, or 9387 years of Netflix collectively.