NBN Co offsets $5.5b hit to cashflow with lower payments to Telstra/Optus

NBN Co released its Corporate Plan for the period FY19 to FY22 on 31 August 2020 with headlines that implied that everything is still on target to be completed in 2020.

The Corporate Plan shows an increase in peak funding to $50.9 billion (up from $48.7 billion) as a result of three main issues, namely :

The total impact is approximately $2.4 billion which is more or less in line with the extra $2.2 of peak funding that will need to be raised from the private debt markets.

However a deeper analysis shows that there has been more significant deterioration in the mix of revenue and capital expenditure with reduced payments to Telstra and Optus helping to offset the damage.

The below graph shows the revenue, capex, non-capex and the contingency reserves over the period from FY18 to FY21 side by side for the last two corporate plans. 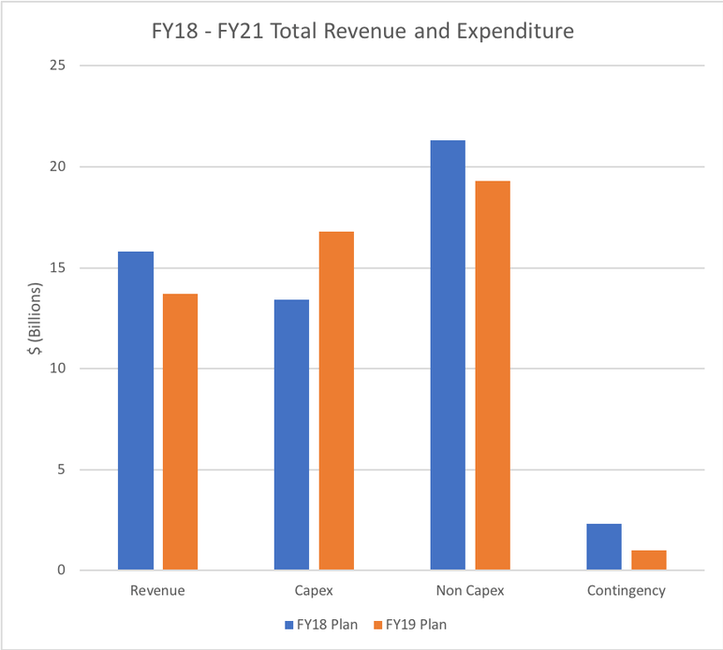 The changes between the two plans are more easily seen in the below waterfall chart that shows how the net $2.2 billion of cashflow changes over the 4 year period are made up. 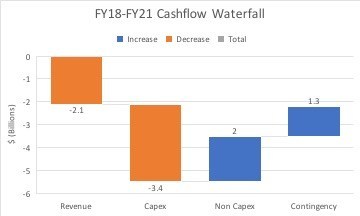 The loss of revenue and increase in capex are significant. The revenue has declined by 13% and the capex increased by 25% compared to the forecasts for the period provided in the FY18 Corporate Plan. The total impact to NBN Co’s cashflows of these two items is $5.5 billion.

The $3.4 billion increase in capital expenditure is summarised in the following graphs. 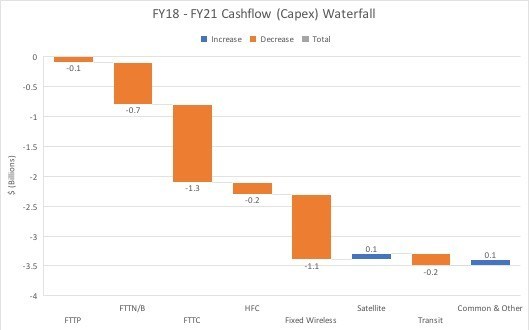 The increases in capex have mainly come from FTTN/B, FTTC and Fixed Wireless. As explained by NBN Co, the Fixed Wireless increase is due to costs required to relieve congestion in this part of the network as takeup and usage has increased.

For the fixed network technologies it is useful to perform a comparison of capex / premise added during the FY18-FY21 years from both the FY18 and FY19 plans. 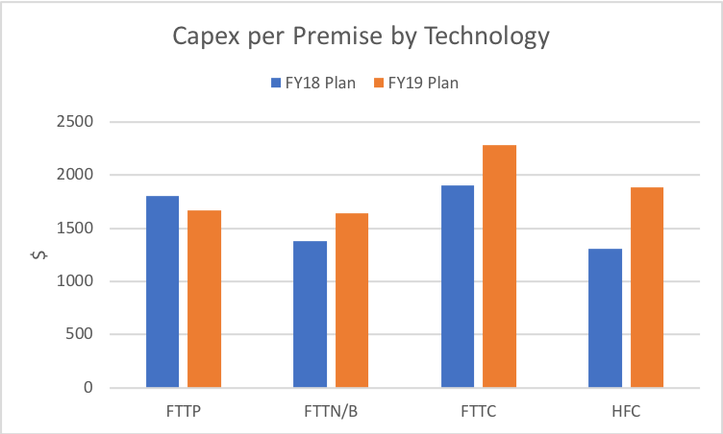 The change in Capex / Premise per technology (see chart below) for the period highlights the significant movements in costs per premise for each of the fixed technology types.

As can be seen from the above it is clear that the FTTP technology capex per premise (which are predominantly Greenfields premises) has come down in cost considerably while the capex costs of the the Multi Technology Mix technologies have increased substantially between the FY18 and FY19 plans. The HFC cost has increased by nearly $600 per premise.

It is also apparent that while the capex for HFC has increased by $0.2 billion the impact is in fact far greater because of the reduced number of premises now allocated to the HFC technology. Total FTTC capex costs have increased due to the increase in premises allocated to FTTC (an extra 400,000), however the costs of FTTC have also increased per premise. The cause of the increase of approximately $250 per premise in FTTN/B is not clear from NBN Co’s latest corporate plan.

Over the period FY18 to FY21 NBN Co is forecasting a reduction in non-capex spending of $2.0 billion. This combined, with reducing the contingency reserve of $1.3 billion, offsets the $5.5 billion hit to cashflows from revenue and capex to come up with a net new funding requirement of $2.2 billion.

The changes in non-capex spending are as follows :

The decrease in Interest / Working Capital is understandable given that NBN Co is drawing down its financing facility from the Australian Government more slowing than anticipated in the FY18 plan due to the delays in the rollout.

However, the reduction in Subscriber Payments is not so clear cut. The drop of $0.7 billion is a drop of 8.6% . The number of customers connected by NBN Co mainly drives these payments to Telstra and Optus as part of their negotiated deals. Under the latest plan the number of customers activated as of FY21 decreased slightly to 8.4 million from 8.6 million. This represents a decrease of 0.2 million or 3.3% over the period from FY18 to FY21. This seems too small for such a large drop in the Subscriber Payments by itself.

What other reasons could there be for such a drop in Subscriber Payments?

The change may be due to a higher mix of activations that do not involve migrations from the Telstra and Optus copper and HFC networks. This is difficult to determine as it seems the overall mix of Fixed Wireless, Satellite and Greenfields connections have not changed too much. The reason maybe that NBN Co are picking up higher numbers of customers from other fixed networks such as those provided by TPG Telecom in Canberra, Geelong and Ballarat. Another reason may be that NBN Co is predicting more migrations from Telstra and Optus that will not satisfy the criteria for the Subscriber Payments. NBN Co can claw-back some of these payments if the customer moves onto non-NBN Co wireless connections within a set period of time.

In any case the decrease in Subscriber Payments, if forecasts become reality, will be a worry for Telstra and Optus unless of course they are picking up extra revenue by using their own wireless networks to bypass NBN Co.

NBN Co have made substantial changes to their planned expenditures over the critical 4 year period from FY18 to FY21. The period is forecast to require $23.4 billion of funding (with over 90% coming from debt rather than equity) and represents almost 50% of the total required funding of the entire project.

The large hits to cashflow ($5.5 billion) from lower revenues and higher capex are partially offset by lower subscriber payments to Telstra and Optus (for reasons which are not entirely clear) and by reductions in the budgeted contingency reserve and interest and working capital expenses.

The changes are on top of the risks that many commentators have outlined around the threat to take up due to NBN bypass by new wireless technologies (eg. 5G) and the optimistic average wholesale revenue projections per user (ie. $52 per month compared to currently $44 per month).