Total SIM growth in Europe came in at 15.8m in 2017, as the highest yearly rise in machine-to-machine SIM cards over the past five years (+21.7m in 2017) was offset by ongoing subscriptions declines in Central and Eastern Europe (CEE), due to lower mobile termination rates and dipping sales of dual SIM cards, according to GlobalData. 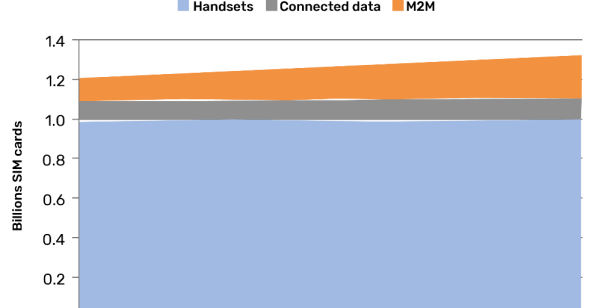 France with 3.3 million and Italy with 3.9 million contributed the most in terms of M2M cards growth in 2017, with most of the other Western European countries registering strong growth.

“In CEE, the growth in M2M cards by 6.6 million was not sufficient against the decline of total handsets subscriptions by 7.5 million. The drop was the highest in the biggest markets of the region, namely Poland, Russia, and Ukraine,” said GlobalData technology analyst Stephanie Char.

Migration to postpaid SIM cards continued in 2017, with net additions of 9.7 million excluding M2M/Internet of Things. Prepaid cards declined by 15.7 million in the same time, with a percentage of total mobile subscription declining by 7 percentage points since 2013, to 51%. Differences still exist between Western Europe (highly postpaid) and CEE (highly prepaid). Excluding M2M/IoT, the share of prepaid cards in CEE declined by 1.3 percentage points over the last five years.

“Data usage is growing fast in the region,” added Char. “Average monthly data usage almost quintupled in Western Europe in the last five years to 2.2GB in 2017 and more than tripled in CEE, at 3.1GB per user per month. Other than Austria, Finland and Sweden in Western Europe, Russia is also contributing to increasing CEE’s average, with Megafon posting very high data usage – 6.5GB per user per month in 2017.”