Amsterdam-based colocation datacenter specialist Interxion is stepping up its drive to cement its pivotal position in Marseille, utilising its campus in the Mediterranean port city to capitalise on the rapidly growing opportunities of an interconnection hub offering customers access to a market of 4 billion potential users.

Speaking to Telecom Times on the sidelines of the Submarine Networks World conference in Singapore, Interxion director of market development and strategy Mike Hollands tipped Marseille as a very fast-growing interconnection and content hub.

“We have 13 submarine cable systems that land into the Marseille city,” Hollands said. “Currently we operate in 13 cities in Europe and we have a very specific model, which is we focus on creating interconnection hubs. You can distinguish us from the large wholesale data centre providers that build massive data centres and then resell that in massive chunks.”

“We call ourselves a sort of retail data centre operator and we distinguish ourselves by having very carrier dense locations,” he added. 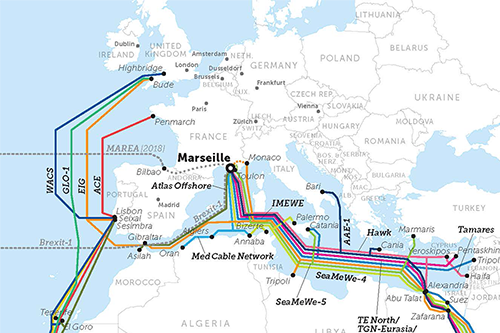 Interxion France MD Fabrice Coquio noted that what made Marseille of particular interest  was that, “instead of being a city-centric concept like Frankfurt, Paris, Amsterdam, it’s a distribution city – or content delivery city – to four billion people, when you include Africa, Middle East, Asia, and India.”

“We have started delivering the second data centre, which is really on the harbour of Marseille, facing the sea,” Coqui said. “It was important for customers that we could offer dual site solutions for obviously resilience, and more than that, because… we are witnessing a significant growth – much bigger than what the market normally is delivering.”

“In our data centre business in Europe, [there] is usually around 10% growth per year, we did much more than that in Marseille the last four years,” he added. “The consequence for us is that as soon as we’ve got available capex, that we are accelerating, in terms of delivering more space than we are now, even starting the third data centre, which will, at the end, we will have invested for approximately 17,000 square metres of data centre in four years.”

Coquio said the firm’s proposition included in addition to value creation based on the colocation services it delivers, a focus on enabling customers to exchange content, traffic, and cloud services within the same hub.

“This is where we bring value to our customers – easy reach, easy distribution platform, whether you’re a game company, or a cloud provider, or a CDN, just by having one POP in Marseille, you can access all 4 billion users,” Coqui said.