Vocus and Vodafone are buddying up to unbundle New Zealand’s fibre network, Kogan.com is launching into the Kiwi telco scene after doing a deal with Vodafone and MYOB has canned out of its planned acquisition of Reckon…

Vocus and Vodafone team up to unbundle UFB

Vocus Group and Vodafone have teamed up to unbundle New Zealand’s ultrafast fibre network in a deal they said will enable them to provide ‘innovative’ fibre services for businesses and consumers from January 2020.

The telcos said the deal will lead to faster broadband innovation, more choice and wholesale price competition by allowing greater investment in the technology.

The joint venture, which follows a recent select committee recommendation to confirm unbundling by 2020, will enable Vocus and Vodafone to reduce their dependence on Chorus and the other local fibre companies who have built the government-funded network. 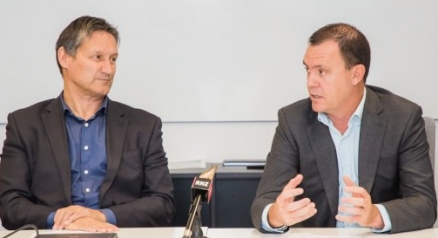 “We don’t see any reason to delay now that the Government has given the green light for unbundling to get underway from 2020,” said Vodafone chief executive Russell Stanners, pictured left with Vocus New Zealand CEO Mark Callander.

“After six years, the four LFCs have delivered a small number of retail fibre products to consumers, compare that to unbundled markets like Singapore where retailers are able to fully customise their products to meet the needs of different consumers. This level of innovation and competition is what we want to see in New Zealand.”

The joint venture will scope, design and invest in unbundling the fibre local loops, with a view to providing wholesale fibre products to the retail market in competition with the four local fibre companies which built the UFB network.

An RFP has already been issued to local fibre companies for layer one wholesale services and pricing.

Fibre broadband network provider Enable is doubling the speed of its most popular residential broadband service after completing its network rollout to more than 200,000 homes, businesses and schools in greater Christchurch – 19 months ahead of schedule.

The company will double the speed of its 100Mbps residential wholesale service to retailers at no extra cost. The offer will be available on new orders from 01 July, with Enable working with retail service providers to ensure as many existing customers as possible get the 200Mbps download speed by Christmas.

The company said around 135 customers are joining the network every day, with more than 74,000 customers now connected.

Enable began its network build – which is part of the Government UFB initiative and includes nine million metres of ducting under footpaths and roads – in November 2011.

Steve Fuller, Enable chief executive, noted that the network construction was ‘an enormous challenge in a city that was devastated by earthquakes’.

Kogan is launching New Zealand telecommunications services on the back of a deal with Vodafone New Zealand.

The company hasn’t disclosed exactly what services it will offer in New Zealand. In Australia the company offers a range of pre-paid mobile plans starting from A$11.80 for 3GB and unlimited standard calls and texts, with prepaid data plans starting at $29.90 for 8GB per 30 days.

Matt Williams, Vodafone consumer director, said the telco was partnering with Kogan to ‘deliver even greater competition in the New Zealand market’.

Kogan.com acquired the online business of failed retailer Dick Smith in 2016, relaunching the online brand in May 2016.

The company had sought approval from the New Zealand Commerce Commission for the acquisition.